Clarence Grimm's enlistment record from the National Archives has not been located.

Married home: With Helen his wife at 2710 Dahle Ave, Madison.

Clarence Grimm attended the Blessed Sacrament Grade School and graduated from West High School Madison. He enlisted in the Army Air Force on 9th February 1942, training as an air mechanic at Kessler Field Mississippi. Then he graduated from the air gunnery school Harlingen Texas and completed combat training with his crew at Davis- Monthan airfield in Tucson, Arizona before joining the 492nd Bomb Group at Alamogordo New Mexico where they were allocated to 856th Bombardment Squadron as crew 607. They flew in their allocated aircraft B24J (44-40146) 'Sugar-N-Spice' across the Atlantic via the southern route arriving at North Pickenham in April 1944. He spent his first weeks on familiarisation flights with the 856th Squadron. Clarence Grimm's first operational mission as Flight Engineer was on 11th May 44 in 'Sugar-N-Spice'. There were two further missions in this aircraft, the six following missions were in a variety of other 'ships'. The final and fatal mission on 4th June 1944 was in B24H (42-95160). This un-named 'replacement' aircraft was on its fourth mission having arrived in the squadron five days earlier.

Clarence 'Bud' Grimm was awarded the Purple Heart and The Air Medal (posthumously) and is buried at Plot E Row 5 Grave 63 the US Military Cemetery at Madingley, Cambridge UK. 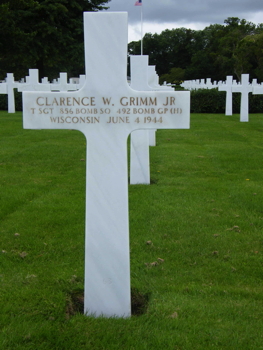