Survived by his sister Grace Atchley (born13th Jan 1915) who married a Sydney Bolton, this union was childless.

Monroe had two elder sisters Laura & Lessie who apparently who did not survive him.

Monroe had married Morgan Bailey, a teacher. They had separated before he enlisted. Morgan his wife moved away possibly to California where it’s believed that she had Monroe’s child called Barbara but unbeknownst to Monroe. Unfortunately we now believe Barbara has also died.

Apparently there are no surviving direct relatives, although we are hopeful that photographs of Munroe Atchley may still be found.

Information as of January 2012 from Ruby Bolton (90yrs), Munroe’s sister-in-law via Hal Dinwiddie, researcher and archivist of the Cowles family.

Munroe Atchley's enlistment record from the National Archives is here. 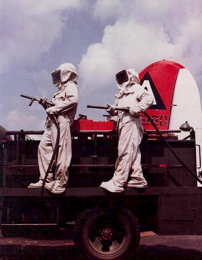 Report of the incident from 44th Bomb group.com:

At 5.30pm 4th June 1944 Sgt. Atchley and Pvt. Bunalski were off duty and eating supper at Shipdham airbase when they heard men yelling that a plane had crashed. They left their meals, ran out on the road, and jumped on the first fire truck going to the fire.
Upon their arrival at the crashed plane, they proceeded to extinguish the flames, disregarding the danger of bombs going off and a gas tank which was burning and full of gasoline. When one or more of the bombs exploded, both of these men were killed. They both were awarded the Soldier Medal posthumously.